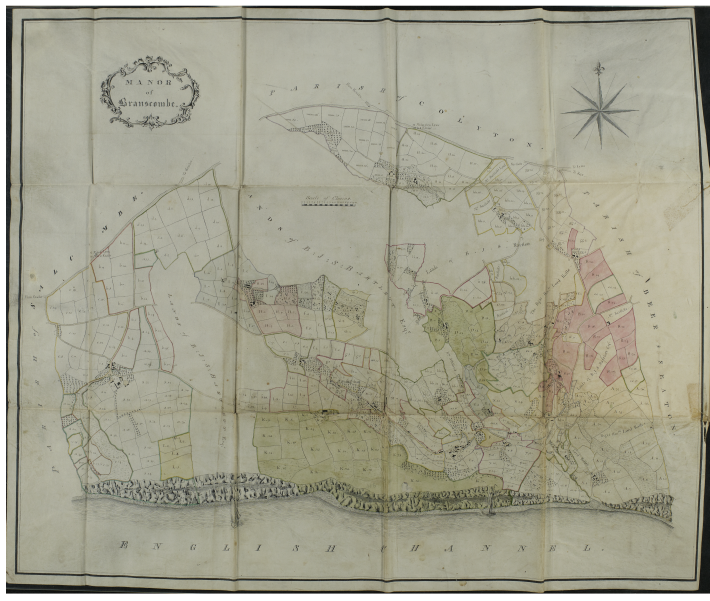 The map, entitled ‘Manor of Branscombe’, was drawn up by Messrs Bradley and Summers of Taunton in 1810, for Barnaby John Stuckey Bartlett and Vincent Stuckey. They were the co-heirs of John Stuckey of Weston, Branscombe, who died that year aged 91, unmarried. Barnaby J. Bartlett (who then took the extra name Stuckey) was John Stuckey’s cousin. Vincent Stuckey was a partner in Stuckey’s Bank at Langport in Somerset, and probably his banker (if related, it was only distantly).

The map shows the leasehold and copyhold properties which John Stuckey had held from the Dean and Chapter of Exeter Cathedral, the Lords of the Manor. He also owned freehold property in Branscombe, which is marked as such but not mapped in detail because it was not, legally speaking, part of the manor. By the time he died, John Stuckey was the chief landowner in Branscombe, and since he (with others) also held the lease of the lordship of the manor, he was in effect squire of the village.

The mapmakers probably based their work on Alexander Law’s map of 1793, and further study is needed to identify differences (if any) between the two maps, and between the two accompanying sets of apportionments. Further study is also needed to describe exactly how John Stuckey divided his inheritance, and to trace the later descent of the farms and other holdings (by inheritance) to the Langdons of Chard and to Vincent Stuckey’s sons,  and (by purchase) to the Fords of Lower House, Branscombe, and others.

The map and apportionments eventually came into the possession of the Ford family, possibly with the deeds of farms rented from the Dean and Chapter of Exeter by John Ford, and possibly when John Ford’s grandson Henry bought the manor outright from the Ecclesiastical Commissioners in 1868. They were presented to the Devon Record Office by the Fords’ descendant Perry Tucker of Branscombe in 2011.

The Branscombe Project is grateful to the Devon Record Office (DRO) for permission to display the map and apportionments (DRO Ref. D8180) on our website.  Particular thanks to Brian Carpenter, Community and Education Development Officer, for his assistance.

To view a particular section click on the map below

The apportionments can be viewed here