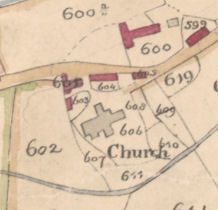 In 1840, as part of a reform of Church of England finances, every parish was surveyed in detail, resulting in ‘tithe maps’ and ‘apportionments’ which list detailed information about each plot of ground.

The Devon Record Office has digitised all the East Devon tithe maps, and has kindly allowed us to host the Branscombe map.

Parishscapes was a three year project (2007-2010), delivered by the East Devon AONB team on behalf and with the support of East Devon District Council, Natural England and Heritage Lottery Fund.

All of Devon’s tithe maps are now on the Devon County Council website here.

The Branscombe tithe map and apportionment can be found here.

(Note:  The map may appear as a thumbnail bottom left of screen and has to be zoomed before it can be viewed)

Alternatively click here for the tithe map.  Note: Its a large file and may take a few moments load.